Fletcher Reinforcing is underscoring its commitment to Levin as it looks to employ up to 25 extra staff and renew its steel bar processing site lease for another decade.

Fletcher Reinforcing is also looking to invest another $250,000 on new machinery for its Levin site, after taking on a number of new contracts.

Having moved to Levin from Lower Hutt in 2014, the company has gone from strength to strength. As a regional branch, the team services Wellington through to Palmerston North and beyond, and is based in the old Loaded Hog building on Main Road South.

Fletcher Reinforcing Branch Manager Donny Smith said Levin was proving to be an excellent choice, as it enabled workers to find cheaper homes nearby and provided good access to contracts around the lower North Island.

“We’ve never looked back, and we’re really pleased we came to Levin. We have two people starting next week, and will be taking on an additional six staff members in the next six months, as well as ten steel fixers and another three or four other staff.”

Fletcher Steel General Manager Hamish McBeath said the company had developed a strong relationship with Horowhenua District Council’s Economic Development team, which had helped it to plan for a positive future in Levin.

“We have found that locating this business in a regional area helps it to tap into the local community for those who are eager for jobs, as well as to attract good staff from the city who are encouraged by the high standard of living, cheaper housing and proximity to beaches and mountains.”

Donny, originally from Scotland, says he’s lived all over the place, including Australia and Christchurch and he loves it here – especially the mild temperatures.

Jen Syme is Branch Administrator and is known by the team as ‘mum’. She moved to Levin from Wellington and loves the fact that she wakes up to the sound of Tuis and not drunk people in the street or traffic noise as had been the case.

“People here go out of their way to help you here. I’ve never experienced that in other places that I lived. I love it,” she says.

Jen says they have a really good team in Levin. “We employ people of all ages, we want a good mix, and we have great relationships with the Ministry of Social Development and UCOL who have steered good workers to us. That’s the key thing,” says Jen, “You’ve got to want to work and to learn.”

“Infrastructure projects in our part of the North Island are on the increase. We have the land, the people and are centrally located – it’s ideal for companies like Fletchers Reinforcing and is all part of Horowhenua’s growth story.” 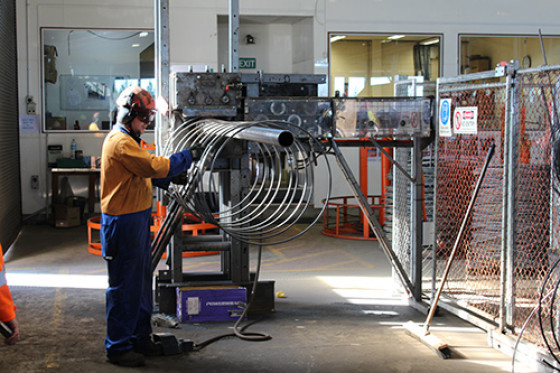