The high-tech facility will accelerate the manufacture of quality homes at scale by producing the core structural components of a home in a factory environment, in as little as a day. Manufactured wall, floor and roof components, which contain locally sourced insulation, double-glazed windows and allowances for wiring and plumbing, are then transferred to build sites and constructed into the weathertight core of a house by specially trained builders.

“Our Clever Core facility will produce core components for at least 500 new homes each year, including 100 by the end of this calendar year. It uses ‘Design for Manufacture and Assembly’ principles to streamline the design, consenting and manufacturing process. This not only significantly speeds up build times, but also enables greater quality control and significantly reduces building waste, by as much as 80 per cent per home built.”

“Clever Core will initially support our Fletcher Living developments, but we plan to extend the offering to group home builders and retirement home operators in the future. Once production is at scale, we believe Clever Core will play a pivotal role in helping the industry deliver more quality, healthy homes that Kiwis love, faster.”
The new high-tech site at Wiri will employ 35 people, from technicians and engineers to carpenters. Many of the new recruits have been employed through Fletcher Building’s award-winning Switch Up programme, which gets young, first time job-seekers into paid work and training opportunities. Specialist training will be provided for Clever Core employees in collaboration with industry training organisations.

“We are proud to match this innovative facility with an innovative approach to recruitment, which is focused on supporting our next generation into the workforce,” said Taylor.

Clever Core componentry is expected to bring unprecedented pace to Fletcher Living’s ability to deliver housing to its developments across Auckland. Its first order of 100 homes is set to be delivered and finished by the end of the year.

Fletcher Living’s developments at Ormiston, Swanson and Beachlands are the first to receive Clever Core structural components, which will speed up delivery and allow people to move in before Christmas. These houses will be indistinguishable in appearance from their traditionally built neighbours once the exterior claddings and facia are added and internal fit-outs are completed.

Clever Core is working closely with Auckland Council to ensure that this new approach to consenting componentry meets the Council’s precise standards and establishes clear ‘record of works’ documentation.

The facility has been set up with state-of-the-art health and safety features and designed with exciting, new technologies including sonar controls on the overhead cranes, and purpose designed equipment from German manufacturer Weinmann. 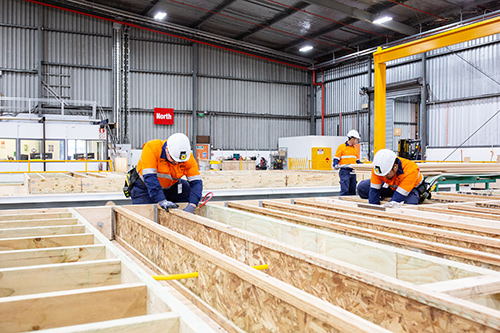